The Permafrost Young Researchers Network (PYRN) hosted its 2012 outstanding presentation award series at the Tenth International Conference on Permafrost (TICOP) in Salekhard, Yamal-Nenets Autonomous District, Russia. Thanks to the generous contributions of several sponsors six awards could be given during the closing ceremony of the conference. In addition to the regular PYRN-IPA awards for outstanding presentation, this year's series also included the Troy L. Péwé award and the Pavel I. Melnikov award, which are traditionally given at International Conferences on Permafrost (ICOP), as well as PYRN awards for outstanding national contributions.

The awards were given in 6 different categories for oral and poster presentations. A jury of more than 10 senior scientists were in charge with the judging, evaluating and ranking of the over 150 contributions. The entire process was lead by Anne Morgenstern from the Alfred-Wegener Institute, supported by Inga May (IPA) as well as Prof. Kenneth Hinkel (University of Cincinnati, USA) and Prof. Frederick Nelson (chair of the IPA Awards and Nominations Committee, University of Delaware, USA).

The winners of the PYRN's 2012 Outstanding Presentation Awards are:

Aleksander Pastukhov (Institute of Biology, Komi Science Center, Syktyvkar, Russia) for "The spatial distribution of SOC in the forest tundra of the European North-East". He received a money prize of 15000 Rubles sponsored by the government of the Yamal-Nenets Autonomous District.

Maria Cherbunina (Faculty of Geology, Lomonossow Moscow State University, Russia) for "Method of Choosing the Optimal Location for the Oil Pipeline Route Using Engineering-Geocryological Cost Maps". She received a money prize of 15000 Rubles sponsored by the government of the Yamal-Nenets Autonomous District.

The 2012 The PYRN-IPA Award for outstanding poster presentation (science):

Corina Doerfer (Geographical Institute, University of Tuebingen, Germany) for "SOC Pools and Stocks in Permafrost-affected Soils on the Tibetan Plateau". She received a one-year personal subscription to the journal Permafrost and Periglacial Processes sponsored by the John Wiley & Sons.

The 2012 The PYRN-IPA Award for outstanding poster presentation (engineering):

Samuel Weber (Geography Department, University of Zurich, Switzerland) for "Design of a Measurement Assembly to Study In-Situ Rock Damage Driven by Freezing". He received a money prize of 200 US $ sponsored by the IPA. 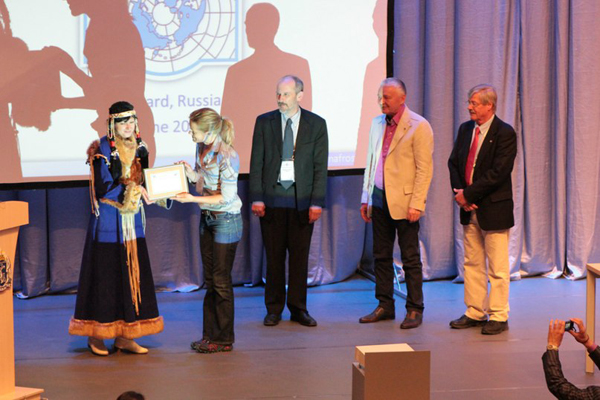