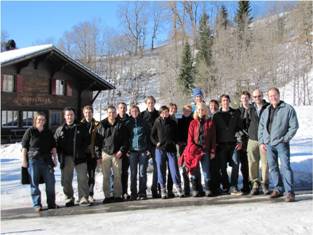 January 19-21, 2010 the second cooperation meeting between the project CRYOLINK and the project cluster "Sensitivity of mountain permafrost to climate change" (SPCC) took place in Habkern, Switzerland. CRYOLINK (funded by the Research Council of Norwegian (RCN)) aims at improving knowledge on past and present ground temperatures, seasonal frost, permafrost distribution and related periglacial processes in Southern Norway and adjoining regions of the North Atlantic region (Greenland and Iceland), by addressing the fundamental problem of heat transfer between the atmosphere and the ground surface. The SPCC-project (funded by the German Research Foundation (DFG)) on the other hand includes five closely interlaced projects, initiated to bridge the gap between climate simulations, spatio-temporal surface and subsurface characteristics and the response of landforms to these changes and, hence, increase the understanding of the mountain permafrost system in the European Alps. Thus, there are clear overlaps between CRYOLINK and SPCC. During the meeting participants of the projects presented results and approaches from their study sites, and joint future efforts were discussed, e.g. for the forthcoming Third European Conference on Permafrost (EUCOP III) in Longyearbyen, Svalbard, in June 2010.