Third PYRN-Germany Meeting
during the meeting of the German branch of the IPA, November 2012, Potsdam

The third PYRN-Germany meeting was held on 15 November 2012 in Potsdam, Germany. This event was embedded in the annual meeting of the German branch of the International Permafrost Association (IPA) and hosted by the German Society for Polar Research (DGP) from 15 to 17 November 2012. Like in the years before, the PYRN meeting, lead by Michael Fritz from the Alfred Wegener Institute in Potsdam (AWI Potsdam), was used to foster collaboration amongst German speaking early career researchers dealing with permafrost. About 30 young researchers from Germany, Austria and Switzerland introduced their projects on Masters, PhD, and Postdoc level. Three main topics emerged during the discussion that range from (1) geophysical applications in alpine and polar permafrost, (2) carbon in permafrost, and (3) palaeoenvironmental reconstructions using archives in permafrost.

(1) The group of geophysicists agreed on establishing a mailing list and data base to share their knowledge on frequently used methods and study areas. This will be coordinated by Daniel Draebing from the University of Bonn. (2) Carbon in permafrost is currently one of the hottest topics in permafrost research. Under the leadership of Jens Strauss from the (AWI Potsdam), we are in process of establishing a sampling protocol for studying carbon in permafrost in a comprehensive manner. The aim is to standardize methods in order to make results comparable and to make the most out of a single sample that was acquired with huge logistical and personal efforts from a remote locality. The suggested protocols will focus on harmonizing sampling procedures and analyzing solid, dissolved and gaseous phases of carbon. (3) A third group of paleoecologists lead by Romy Zibulski (AWI Potsdam) will try to link the well-known summer climate proxies with the rare winter temperature proxies. They will furthermore gather existing relevant literature and compile genetic databases and herbariums as baseline datasets.

The three-day meeting attracted about 60 colleagues from Germany, Austria and Switzerland from 18 universities and research institutes as well as cooperation partners from Russia, Norway, China and Great Britain.

On the last day, we set a focal point on the upcoming 11th International Conference on Permafrost (ICOP 2016). This major international permafrost conference will be held in Potsdam, Germany, as it was decided in 2012 in Salekhard during the 10th International Conference on Permafrost. The venue of our meeting this year in the Kongresshotel in Potsdam was chosen because it will also be the venue during the ICOP 2016. Therefore, all participants had the chance to get to know and test the existing facilities.

Hugues Lantuit, Michael Krautblatter and Hans-Wolfgang Hubberten, who all play a major role in the IPA, presented the main points of the conference concept and together with PYRN gathered first ideas for organizing this event. The next organization steps for the conference will become a central part of our annual meetings in the next years. 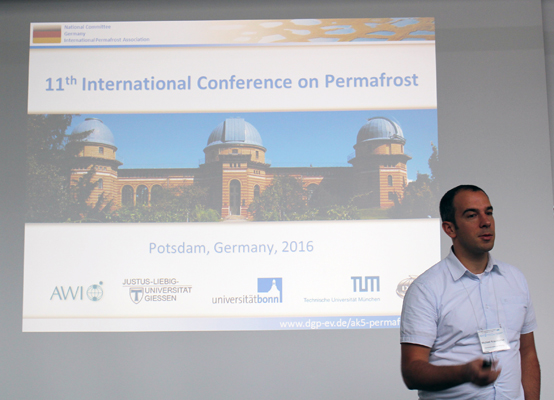 Michael Krautblatter, German representative in the IPA Council, presenting the conference concept for the 11th International Conference on Permafrost (ICOP 2016) to be held in Germany.