During the 11th International Conference on Permafrost in Potsdam/Germany, 20-24 June 2016 (http://icop2016.org), PYRN was honoring the best oral and poster presentations of Early Career Scientists with a PYRN-IPA Award in the category “science” and “engineering”.

275 oral and poster presentations were registered to compete for an award and more than 80 judges were involved in the evaluation process! Further, more than 90 FrostBytes (very short online videos promoting permafrost research and projects) were submitted and evaluated by a judging committee. They are hosted by CliC and can be watched here: http://icop2016.org/index.php/medias/videos

The awards were gratefully sponsored by the International Permafrost Association (IPA), the German Polar Society (DGP) and the Journal “Permafrost and Periglacial Processes” published by John and Wiley. The 2016 PYRN-IPA awardees received a framed certificate and a cash prize of 400 €.

Herewith, it is our great pleasure to announce the recipients of the PYRN-IPA Awards 2016 for the best presentations at the 11th International Conference on Permafrost: 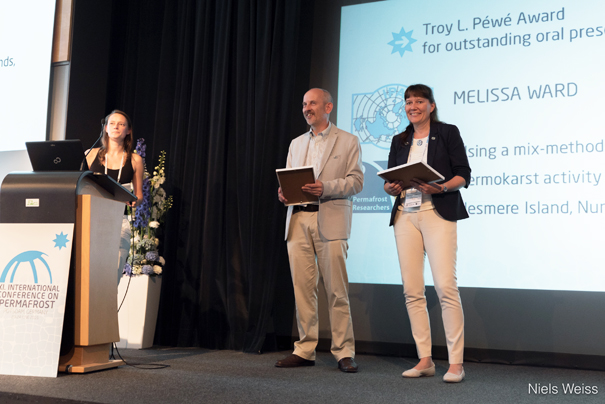 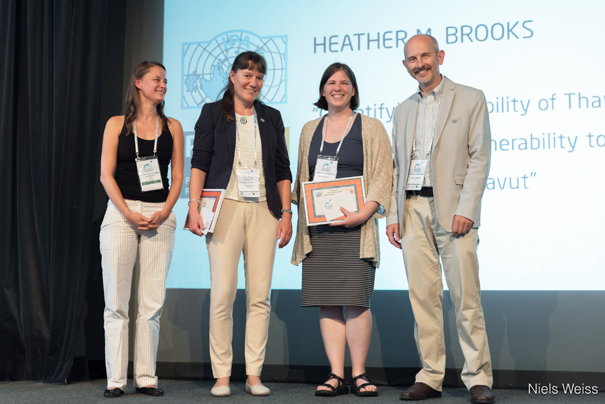 Heather Brooks receiving the Pavel I. Melnikov Award for the best oral presentation in the category “engineering” from Josefine Lenz, Hanne H. Christiansen and Antoni Lewkowicz for her presentation at ICOP2016. 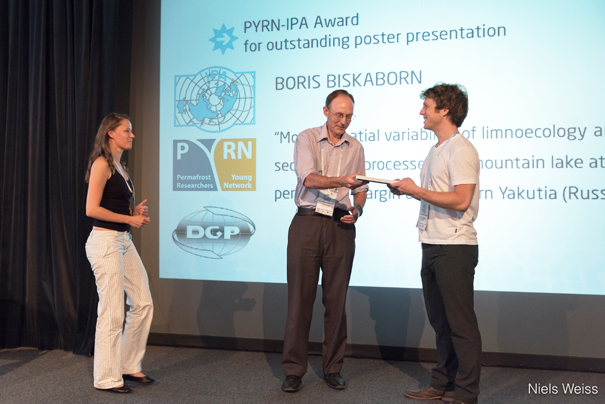 Boris Biskaborn receiving the PYRN-IPA Award for the best poster in the category “science” from Julian Murton (Editor of the Journal “Permafrost and Periglacial Processes”) and Josefine Lenz.

Anna Tolstogan (Lomonosov Moscow State University) received the PYRN-IPA Award for her engineering poster presentation entitled “Changes of the engineering geocryogical conditions in the Yamburg settlement (Taz Peninsula)”. Please note that changes were necessary after the conference due to a judging mistake in the evaluation process. 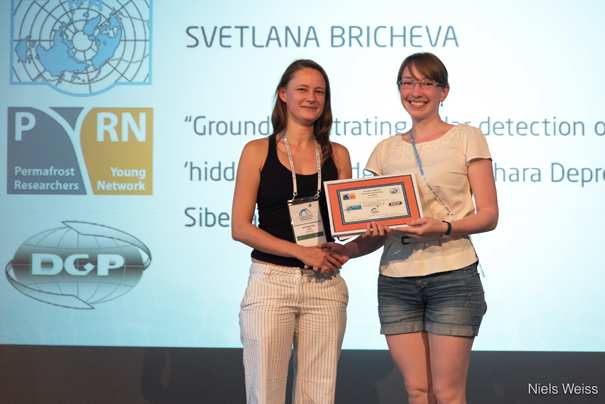 Svetlana Bricheva receiving the PYRN-IPA Award for the best FrostByte from Josefine Lenz who led the overall evaluation process at ICOP2016.

PYRN would like to thank all candidates, sponsors, judges and volunteers who made the evaluation process possible. Thanks to Niels Weiss for documenting the ceremony with this photographs.

Once again, congratulation to all PYRN-IPA Award recipients 2016!